Over the last couple of days, World Cricket has witnessed the blossoming of two Kyles.

Kyle Rico Mayers from the West Indies, who thumped a brilliant 210 not-out chasing a mighty ask of 395 to take his team to a three wicket win against a resilient Bangladesh in their home conditions.

From Kyle of the Windies to another Kyle from South Africa, though his first name is Aiden.

Yes, the coming of age of Aiden Kyle Markram, who scored a solid 108, his first test century away from home in tough subcontinent conditions amid plenty of turn and loads of reverse swing albeit in a losing cause as his and my beloved Proteas sunk to a new low, losing 2-0 to Pakistan in the recently concluded test series.

With the 2-0 defeat at the hands of the Men-in-Green, South Africa have now lost nine tests in a row in the sub-continent dating back to 2015, the inception of this downward spiral losing 2-0 to India, followed by a 2-0 series whitewash in Sri Lanka in 2018, and again a 3-0 annihilation in India the following year.

Add to these woes, the Proteas haven’t won a single test away from home since March 2017, almost four years to date and have lost three out of their last four test series since the inception of the World Test Championship.

In the Pakistan series, while the South African bowling unit to an extent tried to hold their own, with fifers from speedster Anrich Nortje and the new slow left arm find, George Linde, their familiar lower order batting collapses were a tough pill to swallow not on one but all four occasions.

The seven for 33 was another woeful record set by the Proteas as there have been only two occasions where the Proteas have had it worse, 7 for 23 against Australia in Cape Town in 2011 and seven for 32 against India in Delhi in 2015.

So why do these epic batting collapses keep bothering the Proteas?

Well, personally speaking, it’s largely to do with not having a batting coach on the tour who has an experience of playing in sub-continent conditions and has been faced with the challenge to counter massive turn and loads of reverse swing.

Could the batting collapses have been avoided if a person like the great Jacques Kallis was a batting consultant on this tour? After all, he has scored six test tons in these conditions, a performance that’s worthy of every applause.

Truth be told, even the experienced batters in the Proteas line-up, the likes of Dean Elgar, Faf du Plessis and the volatile Quinton de Kock were all the sea facing up to a buoyant Pakistani attack, so how would you expect the lower order to hold their own?

Coach Mark Boucher can also only do so much in sharing his wisdom to counter these tough conditions as he summed up the disastrous performance by dwelling on two things; lack of mental application and diminished match awareness.

Out of all the negatives, what hurt me the most was the way Quinton de Kock played, as reckless as he can be despite the fact that he was the interim leader.

The team looks up to their leader but here South Africa had everything but one.

Thank heavens for the Management to decide on making Quinton de Kock relinquish the test captaincy role come the next assignment, as that’s just not him and he would be the first to admit this.

Credit must also be given to the Pakistanis with brilliant batting from the likes of Fawad Alam, Mohamed Rizwan and the all-rounder Fahim Ashraf.

Add to this, the excellent bowling display from the debutant left arm spinner Nauman Ali in the first test and the super reverse swing bowling from the two speedsters Hasan Ali and Shaheen Afridi made their attack look all the more threatening.

So, the test series is now water under the bridge and its time for a new Proteas side led by the flamboyant Heinrich Klaasen to take up the T20 challenge.

The only question that remains is which Proteas side will show up for the T20 series.

A motivated one or a deflated one? 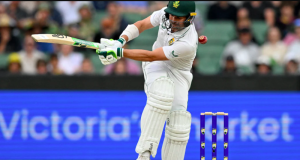 Pranay Rangra - December 31, 2022
0
Well, this is the question every Protea faithful has on his mind in the aftermath of the thrashing...