It’s Day 2 in the historic pink-ball Test between India and England. Hosts Team India have just been rattled by a certain Joe Root – this time with the ball. From the position where the hosts could have called the shots, they are bowled out for just 145, losing their last 8 wickets for 47 runs.

The momentum is completely with the visitors. Skipper Virat Kohli looks around with the ball in his hand. Who should he give it to? Surely to Ishant Sharma -playing his 100th Test, or Ravichandran Ashwin – someone inching closer to 400 Test wickets.

But no, Kohli turns around and hands the ball to a certain Gujarat all-rounder on his home ground. That all-rounder is no one else but Axar Patel. And what does he do? He picks up two wickets off the first three balls of the innings and sets the tone for the hosts.

No one, absolutely no one saw this coming.

Even the most sane pundits would not have bet their money on Axar Patel to be India’s biggest match-winner in this series.

But this is beginning to form a certain pattern, and that pattern is the inexperienced young guns performing in the absence of first-team players. The likes of Washington Sundar, Mohammed Siraj, Shardul Thakur, et cetera have ushered in a new era of players that will take Indian cricket forward and Axar Patel has been added to that list now.

For someone who made his international debut well over half a decade ago, it was highly commendable for Patel to break into this Indian Test team. And lest it is forgotten, emerge as the unlikely saviour and winner in a platform highly coveted and second to none in the sport.

He made his name in the 2014 edition of the IPL for a rampant Punjab Kings side that reached the IPL final.

However, with the likes of Ravichandran Ashwin and Ravindra Jadeja being mainstays of the Indian spin department, coupled with the rise of Kuldeep Yadav and Yuzvendra Chahal in white-ball cricket, Axar Patel had lost his identity somewhere.

Nevertheless, he kept on persevering in domestic cricket and was positive about a possible India call-up sooner rather than later.

It was Axar Patel who broke the game open for the hosts – something that Ravindra Jadeja is known for providing. This was exactly the reason why the 27-year-old was included in the Indian team as far as the red-ball was concerned. The beleaguered visitors failed to live up to the class of Axar Patel and were tamely bundled out.

Quite a few eyebrows were raised when Axar Patel was drafted into the Test squad. But this proved to be a masterstroke as he has picked up 18 wickets in just his first two Tests. What made the Indian team go to an all-rounder who was rather assumed to be a white-ball specialist?

The entire nation was proud of India’s historic series win Down Under. Their heist in Sydney was perhaps the epitome of their determination as they batted out the entire final day to salvage a draw. However, that draw came at a cost as Jadeja was one among quite a few players who injured themselves. A fractured thumb was the reason the all-rounder from Saurashtra had to miss out on the England series.

This was a huge blow, since Jadeja provided that batting depth and also was an extra bowling option. Axar had a decent domestic record with 134 wickets from 39 first-class games for Gujarat. He also had a decent average of above 30 with the bat.

Thus, there were signs of it being a like-for-like replacement in place of Jadeja. However, stepping into Jadeja’s shoes is never easy, especially with the camaraderie that he shared with Ashwin. Nevertheless, Axar took to the role like a fish takes to water.

Axar Patel showed he had the art of bowling straighter balls in a rank-turner. This art proved to be extremely difficult to handle for the visitors, who have had a history of struggling against left-arm off-spin.

There is no doubt in the fact that Axar Patel has fast-tracked himself into being one of the most important components of India’s Test team. If he contributes with the bat too, we might well see him rise above the likes of Kuldeep Yadav in the pecking order for India’s third spinner in Tests.

Deservingly so, Axar Patel has also been named in the T20I squad for the series against England. It’s where all those seasons of draining himself under bright lights of the IPL will come handy.

And make no mistake- with the arrival and rise of Axar Patel, his team’s spin department appears healthy, even minus Jadeja. 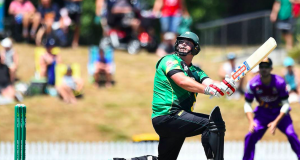 Abhishek Srivastava - May 26, 2020
0
It's hard not to think what Jesse Ryder might have achieved with a little more commitment and discipline. A player with extreme potential and...