We have talked enough of how a country of 4.6 million have always punched above their weight in sports. But New Zealand, for long time, have been considered as perennial dark horses whenever they played against bigger nations with glorious history and strong financial clout. Though, in past decade they have created a bunch, which is ready to flex its muscles with the big boys- a result of which were the lasting tremors the English felt on their home soil.

For starters, New Zealand reached the last two world cup finals- let it not be forgotten. And in the more recent Tests against India, they hammered Kohli’s side by 2-0 margin. Make no mistake for this may never have come easy- but New Zealand are a committed lot and are arguably the best when they play as a unit. They’ve now won two series- in Australia and now they have won an away series against one of the major Test powers- England.

And this win is special for it has taken 22 years for them to register their second-ever series win in England. But this came at right time, as they are gearing up for the battle of the coveted Test crown come Friday, i.e., June 18.

In 1999, when Stephen Fleming’s men registered their first series win on English soil, it was considered a special win for the team that had struggled for longer parts of the 90s’ (1992-97). Now, the win under Kane Williamson is also no less special for it’s an away series win, many of which are hard to come by in the modern era. Above all, the team didn’t have six first choice players, who were unavailable due to multiple reasons. It won’t be wrong to say that this series win is as big as India’s enthralling win in Australia, earlier this year.

The only difference is probably that it won’t be all over the media for the next week or so and experts and fans won’t be going gaga on social networking sites for due to some strange reason, New Zealand are quietly admired, not subjected to gargantuan celebrations that are about grandeur.

Perhaps it only makes sense since that’s how New Zealand work and have, even after becoming one of the best teams in the world; it remains a low profile, closely-knit unit that doesn’t offer banter or content that can create strange hype.

In this Test, New Zealand found number of positives, especially in form of Devon Conway who is a long-term prospect as he has shown remarkable temperament in all formats. Tom Blundell looks all set to fill the hole which will emerge after retirement of BJ Watling. While Matt Henry, Kyle Jamieson and Ajaz Patel showed the depth in New Zealand attack which is no more depended only on big names like Tim Southee, Trent Boult and Neil Wagner.

Moreover, New Zealand also have capable all-rounders in the form of Colin de Grandhomme, Daryll Mitchell and Mitchell Santner. The performance of Will Young has shown that they have young batsmen coming up. New Zealand know that they have to build a strong bench strength while their main players are still playing as they don’t want to fall, like Sri Lanka and South Africa, two teams who have withered away after a successful era and are now in the process of reconstruction.

New Zealand did show they have the right arsenal to bowl out the opposition while bowling first as they scuttled the home side for 303- a decent but not a really strong score. When they batted, they showed purpose with Devon Conway and Will Young showing the way to the team and later, on Ross Taylor’s 80 ensured that the visitors get a crucial lead of 85 runs. However, the match was at par as New Zealand were to bat last in the fourth innings. New Zealand bowlers, though, had other ideas with some excellent bowling mixed with inept English batting enabling Kane’s side to emerge as the able one.

New Zealand bundled out England for just 122 in the second innings.

Matt Henry and Neil Wagner were excellent and were well supported by Trent Boult and Ajaz Patel. Patel, on his part, showed the importance a specialist spinner holds to both teams; New Zealand- who have preferred Santner because of his batting ability and England- who perhaps inexplicably dropped their best spinner Jack Leach.

On the fourth morning when New Zealand chased down the target it was fitting that both Tom Latham and Ross Taylor were on the crease. Latham had been brilliant as an stand in captain while Taylor’s long lasting career had another illustrious achievement added to it. A win in India and Australia might be the next target, something that will really bolster the side that happens to be everyone’s second favourite team after their respective country.

As the above shows that New Zealand have found it hard to win against England improving only with time and the added increased talent base. Since registering their first win on England in 1978, the Tests have been 25-12 in England’s favour.

New Zealand are aware of the historical facts, but they don’t make it a burden on themselves as Kane Williamson has always preferred to live in the moment and to play well in the current for that’s where glory lies.

May more of that belong to a team that persists until the end and never gives up. 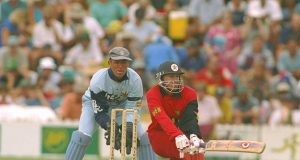