2016 was, without an inch of doubt, one of the most promising years in the women’s game. And yet, it was also very much a year of several ups and downs. Replete with mega achievements and some special ‘firsts,’ 2016 was underlined by heartbreaks as also sad exits.

While on the one hand, it proved to be a remarkable year for the West Indies women, who won their maiden World T20 title and that too, miles away from the breezy comfort of the Caribbean, it was also to be the year that saw one of the greats in Charlotte Edwards exit the game.

Though that was not before painting the sport with vivacious colours and achievements.

While Stafanie Taylor led the Windies stable to a table-topping achievement that’s second to none in cricket’s most entertaining format, she also earned the “Player-of-the-series” decoration for thudding 246 runs.

On the other hand, mega talents in Sophie Devine and Leigh Kasperek, the former a hero in the women’s game, clinched the most wickets in the mother of all T20 battles: taking 9 dismissals.

Yet, on the other hand, during March, Meg Lanning for the first time in her ‘mega’ career, was out without scoring a run in a T20I.

But was that all?

In the second half of the year, the women’s game was set alight by a magnificent and entertaining series between the rising Irish side and the enterprising Proteas women. South Africa’s tour to one of Europe’s most picturesque parts contest saw sterling performances from either sides, in particularly from Kim Garth, but none more stellar than Mignon du Preez’s fantastic century in the Second ODI at Dublin.

The then 27-year-old batter, who had already relinquished captaincy, indicating her desire to focus on her batting craft and take it to the next level, meant serious business as Ireland and the home fans learnt things the hard way on August 7, 2016.

Though a lot had happened before the 50-over series began.

The ODI leg of the series actually followed a tied T20 series that began from the 1st of August, where one saw stern Irish resistance in the Second T20I after the visitors made light work of the Laura Delany-led side in the opening curtain-raiser.

The second game belonging to Delany and her girls meant that something had to happen in the four-match ODI series where either sides had more opportunities than afforded by the game’s shortest format before.

And South Africa didn’t take that long to prove their intentions, thrashing a Delany, Garth, Shillington, Joyce-powered side in the first contest by 89 runs.

Aided by a lower-order cameo by Chloe Tryon, who fired a personal best ODI-score agains the Irish, a 68-ball-92 (which also happens to be her best ODI performance) and later, Sune Luus’ magificent 6-for, the Proteas Women proved too hot to handle for the Irish comfort.

Though in that game, one particular bat remained silent. It belonged to Mignon du Preez, who went without troubling the scorers.

Not a sight that the ever-dependable Protea bat would’ve liked much.

Not one bit, especially since she’s the holder of an enviable record, a world record at that for the Proteas women. That of playing most innings in ODI cricket without getting out for a duck: 33. A record that lasted for nearly six incredible years, beginning from 22 Jan 2007 until 3 February, 2013.

So on August 7, 2016, determined to do something special, one of the finest batters in the game, didn’t produce-but rained– runs from the bat.

Batting first and getting off to a slow albeit solid start, the Proteas women completed sixteen overs without losing a wicket. Wolvaardt and Chetty negotiated a track spinners and medium pacers where batting, it seemed, would only get better after some time.

But the joy was short lived as the leg-break specialist Ciara Metcalfe removed Laura Wolvaardt, today one of the finest exponents of the cover drive in the game, for 35.

In walked Mignon du Preez in the seventeenth over with a fifty-run stand having already been posted on the board, but the big task of upping the run-rate in order to seize control of the series (this being the second match of the series) yet to occur.

And boy, did she do exactly that!

Carrying her bat for the next 198 deliveries of the Proteas women’s innings, which is no fewer than 33 overs, du Preez cut, pulled, hooked, drove and painted a portrait of poise amid pressure as she brought up her 2nd ODI century on a day where Ireland were lost at their home with the Proteas looking very much at home, despite playing away from homely comfort.

A classic century knock, it ought to be said, is one that focuses on compilation of useful stands, that feature a certain volume of numbers.

That’s exactly what happened when the famous Preotrian compiled a useful second-wicket stand with Trisha Chetty, which yielded 75 runs, before Chetty departed in the thirtieth over.

Truth be told, the 2nd ODI wasn’t all South Africa since Ireland did bounce back, dismantling the Protean middle order in a space of two deliveries- Steyn and captain Dinesha Devnarain- going back for naught.

But while the Irish were stirring up a storm, there was pleasant reassurance seeing Mignon du Preez holding fort at the other end.

Not that the lower order offered her magnificent support at last, since Luus departed for a meagre 10, which is when Chloe Tryon joined forces with du Preez to execute a rescue operation for South Africa.

From being 65-1 to spiralling to 168 for 5, the Proteas, one would’ve thought were on the back foot. Though, one woman wasn’t.

Stepping down to Gaby Lewis, one of the most talented and vivacious spinners around, Mignon lofted a gorgeous extra cover drive and later, hitting one gun barrel straight toward long on.

Not that she was quite against Lucy OReilley, whom she cut square on the off side at mid-way stage to execute an eye-pleasing stroke that signalled while the team’s scorecard may have seemed under a bit of rough weather, the batter certainly wasn’t.

Kim Garth was shown the respect as the right-arm medium pacer, who’d later remove Tryon proved to be the pick of the bowlers, going at only 4.9 an over.

Though Mignon was determined akin to a mountain climber challenged by a stiff uphill climb to up the ante of runs.

This was something indicated abundantly well by her boundary scoring percentage.

52 of her 116 runs came off glowing hits to the fence. 13, well, as one might agree, is not always an unlucky number.

Punishing the evergreen Isobel Joyce, who conceded off her 10 overs, now retired from the game, Mignon pulled a quicker one that hit the deck hard just a yard short of good length toward the deep wicket boundary. The sound that her bat produced was like the one we hear when a double decker bus collides into the rear of a four wheeler scooter.

Taking the team to a 272 run total, an exemplary performance given around the 31-over stage, the visitors were firmly pushed to the backfoot, the contest, in the end, became Mignon du Preez versus Ireland women.

To this day, her 116 brave and boldly collected runs remain her personal best ODI outing, a knock laced by power hitting which beckons a relevant question to those who might have desired the right hander to up her hitting prowess particularly in the period from 2018 onwards.

For someone who has more fans than critics, in absolute honesty, Mignon du Preez was doing great power-hitting half a decade back even before smoking big T20 hits became popular and ever so relevant as one what finds today, where Cricket has become a more fast-paced exercise in the contemporary firmament than it probably ever was.

It’s not that du Preez didn’t shine brightly in the T20I series that was held before. In the opening T20I, she helped her team achieve a fine win courtesy a 55 that came off just 41 deliveries. Then, her strike rate of 134 indicated that the batter behind useful defensive strokes that protect an end and offer solidity amid duress can also turn into an exhibition of explosion on the 22 yards.

One that doesn’t engage in wild celebrations nor rubs her victories on the face of the vanquished.

If that doesn’t indicate how the greats conduct themselves in the game, then one wonders, what does? 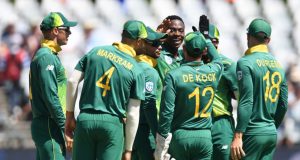 2020: A Season To Ponder and Plan For The Proteas

Pranay Rangra - April 4, 2020
0
To put it simply, given where it stands at the moment, it appears, despite possessing mighty talent and that characteristic desire to shine at...