Kimani Melius holds one of the most exciting careers in all of West Indies. Young and growing. He’s got time, age, importantly willingness to learn on his side. And we all know what significance a young talent holds in the sport and not in the least, the West Indies. Look at India, South Africa, Australia and New Zealand. Not to forget, Pakistan. Look what the likes of Rishabh Pant and Shreyas Iyer, Aiden Markram and George Linde, Adam Zampa, Rachin Ravindra and Shaheen Afridi have done to their respective nations.

To follow suit, the West Indies must walk down the same path. Find the right talent. Nurture it. Spend resources on grooming them and find more and more of the likes of Kimani Melius; batsmen who love to bat and score whilst they bat. Batsmen who can put on a fight and stay true to the adage that for cricket to grow at rapid pace, talent must be discovered and nurtured at great pace too.

And if there was a year that proved one of the best for Kimani Melius of St. Lucia then 2021 was it. For this was the year where the young and able right hander from the often under-appreciated island paradise went to England in what was his maiden club cricket experience.

It’s where he played a lot of T20 white-ball cricket. It’s where the noted Westhoughton CC cricket club happened to the boy with a calm mind over his shoulders.

But make no mistake. For all of that to happen, Melius, who struck massive hundreds and vital, often game-changing fifties, had the able support of coaches.

Men like the class and caliber of Alton Crafton who helped Kimani Melius grow in his craft. And here’s a point.

Many would know Sir Coach Simmons. And it’s all fine and nice.

Many around the world actually do. Even the kids who grew up on phone apps and iPads who’ve heard from their fathers about the tales of the 90s’ West Indies.

They’ve heard about Phil Simmons from them.

But why don’t we get to hear more about able, wise, passionate and selfless coaches like Mr. Alton Crafton?

About time that the usual narrative about sticking only with the popular and renowned must change. Much like how many know about Harsha Bhogle and Ian Bishop but about time, many should know about Vernon Springer of the West Indies.

It’s great that with the discovery of key cricketing talents, we discover the forces that rallied around them.

Ditto for Kimani Melius, a man who right now wishes for one thing and one thing alone.

To wear the famous maroons that belong to his West Indies. There’ve been a few hits and mishits along the way. But it’s going just fine.

The numbers tell their tale. The big stats of 2021.

In England, he fired- didn’t only conjure- knocks like the 112 off 42. Then a belligerent 162 off 149. There was also the 61 to put the Bolton, UK-based Blackrod Cricket club to the edge.

Not for forget a timely 85 against the renowned 85 against the Eagley cricket club. Those were some of the several game changing knocks that gave a sunny boy of St. Lucia who grew up watching Test and white-ball cricket on the breezy beaches of West Indies a rush of playing in England.

And as 2021, which turned out to be a progressive year for the rising name from the West Indies draws to an end, we had one more conversation here at Caught At Point with the boy, who despite his flurry of runs, didn’t seem ‘satisfied.’ For he wants to do more. To go out there and express himself. Through the bat as only he can.

Here’s what Kimani Melius had to say recently, “2021 has been a great year for me. For all those experiences of going to England and playing in seaming conditions. It’s here where the balls tends to swing a lot more than in the Caribbean, where the ball comes a lot to the bat. In England, I learned the need to play the ball a little later for you have to adjust your game. I discussed a lot of my game with Toby Radford, whose insights helped a great deal.”

When asked about what adjustments were needed to be made, then the following is what Kimani Melius had to say, “I worked on my game both mentally and physically. I did a lot of training with Mr. Martin, who was our trainer during the Under 19 world cup days.”

Moreover, responding to if there were disappointments along the way, if at all, the following is what the batter had to say:

“I must say not being selected for the CPL was a bit disappointing. But I believe, playing in England was the best thing that happened to me. It gave me a bit more time to think about my game, on what to do to take it to the next level. Gave me the need to develop more resolve in order to become the athlete that can perform anywhere consistently. Yeah, so now is the time where I have to take my career very seriously. I have that extra hunger; the razor sharp determination to continue to bat and score. I wish to be more consistent since I don’t want to be getting out in the thirties and forties, of lately. But I know I can go beyond that for it’s just a mental blockage. It’s just a matter of moving on, learning from my dismissals, taking feedback from my seniors.

Lastly, I must say 2021 was a decent year. Scoring that big hundred in England was vital. I will remain focused and keep my eye on the bigger picture.” 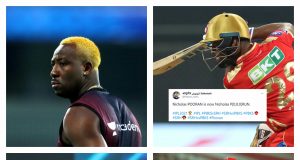