Just how many of us are surprised that Amelia Kerr just bagged a huge honour in the ODI arena? It shouldn’t be that puzzling after all?

Amelia Kerr was awarded the ODI Player of the year at the NZCs awards ceremony for the 2021-22 season. This came on the back of her golden run in the ODI’s. Her all-round credentials were the centre of many record wins New Zealand collected during this period. One of them was New Zealand pulling off a massive upset against India just prior to the 2022 Women’s ODI World cup.

Amelia Kerr had a decent outing with both bat and ball since 2021. But, her actual rise to form came with her comeback to the international arena after she pulled out from the tour of England. She was out of the circuit for no fewer than eight months. Upon comeback, her trial was the series against India in February 2022.

Implicit in her success, you could say, has been her composure with the bat despite being frequently shifted up and down the order; since 2021, Amelia was given the fourth and fifth spot in the batting order. In 2020, however, she came into bat after five down.

The White Ferns began their 2021 campaign with the series against England in February 2021. Amelia came into bat at number five. One of the notable performances in this series was the third match that unfurled her all-round heroics. Kerr scored a fluent and unbeaten 77 and also picked a 4-wicket haul. These were her best bowling figures in the series and the only 4-fer taken in it. She returned with an economy rate of 4.57 at an average of 28.

Her importance is not just about being a leg break bowler who can keep things tight in the middle-overs, but Kerr is regarded as a wicket taker during key intervals. It’s something that adds more strength and depth to this bowling unit.

In February, where England toured New Zealand, Amelia Kerr fired an unbeaten 72 and compiled 87 from just 3 games, averaging in the mid forties.

Following this series, the White Ferns faced the mighty Aussies. Amelia was promoted up the order to bat at four. She had a decent outing scoring 84 runs, but picked up only 2-wickets in the series. The only gaffe, if at all, was the economy of 5.9.

Then came a bit of drama; as New Zealand were about to tour England, Amelia Kerr pulled out in order to focus on her mental health and well being.

For someone who was just 20 back then, you feared the worst. But that was when the Amelia Kerr tale of inspiration and bouncing back would take shape.

After a gap of ten months, the dogged cricketer made a comeback against India. This was no ordinary return; she helped the team being at her absolute best, seemingly invincible in every role she took on. During the course of the ODI series, she hit three fluent fifties and a century.

The shakiness and confusion as evident previously had vanished into thin air; what was on display was a cricketer keen to turn around a corner.

She was the heart of the record chase in the third ODI when the middle order pulled off a cracker of a win. Asked to chase down an imposing 280, Kerr, joined forces with middle order forces in Maddy Green and Lauren Down and made this feat possible. She achieved the player of the match honors twice.

Amelia Kerr was also, rather unsurprisingly, the player of the series for her sublime form with bat and ball. She struck 353 runs at a stunning average of 117.66 and picked seven wickets at an economy rate of 5.7 an over. That’s not all; being a true athlete, she also grabbed 9 catches, which is the best all-round figures in her young and blossoming career thus far.

March 2022 would see an ascension in the all rounder rankings where ODI’s would be concerned given her incredible all-round effort in the series against India.

But that wasn’t all; even in the recent world cup, Kerr was superb in scoring 201 runs, which became the third highest tally in the New Zealand camp. Moreover, she took 9 wickets at an average of 31.7, the quota of dismissals identical to England’s recently-retired legend, Anya Shrubsole.

At present, Amelia Kerr is the highest run-getter for New Zealand since 2021 with 725 runs at an average of 48.5. In such time, she’s also collected twenty two wickets in ODI’s attacking like a raging storm in what is often a nail-biting, rhythmic format of the game. 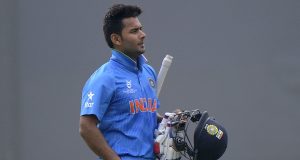 Of Rishabh Pant And An Opportunity Squandered!

Bhavesh Bhimani - July 9, 2017
0
When the 5-match India-West Indies ODI series was announced back in May this year, not many Indian fans were thrilled. Most were groaning outright...