Amidst all the blitz and flurries of science and technological advancements, ageing continues to stand tall guised as the ultimate snatcher. As the cellular organelles face the inevitable exhaustion and the membranes along with their pumps start to tumble, the eventualities soon begin to express on a macroscopic level.

Like every other international athlete, age has caught up to Aaron Finch as well.  The sands in his career hourglass are down to the few last grains. Evidenced by his waning form, slowing reflexes and a chronically inflamed left shoulder that just doesn’t want to heal, Finch took no time swallowing the tough pill and hanging his boots.

Rocking a stout physique and eloquent presence, Finch was as Victorian as they come. Fittingly enough the mighty MCG was his hunting ground that witnessed a handful of his career highlights. Starting all the way from his ODI debut to his first hundred against a big team, his first world cup hundred and last but not least lifting the coveted world cup trophy – the ‘G was at the centre of it all.

To have the opportunity to draw curtains on your career at a ground of such gargantuan significance is what any cricketer or professional athlete would drool over. But not Aaron Finch. For he was a cricketer that had selflessness sewn into the very fabric of his modus operandi.

With the ODI world cup just a year away, the Australian skipper thought it was best he stepped away and provided his successor enough time to settle in and march forward with all guns firing. It sure won’t be easy shoes to fill as Finch is leaving behind not one but two voids – the captain and the opener.

Australian limited overs opening have been quite under the weather ever since the severance of the slaughterous Gilchrist-Hayden duo. Unable to find a good enough replacement Australian selectors were in full chopping and changing mood until the pair of Warner and Finch dawned on them.

Arm in arm they blossomed into one of the most feared opening batters in world cricket. Their cataclysmic wielding of the willows catapulted Australia to a world cup semi final berth, a WT20 win and an ODI World Cup win amongst many other accolades. Finch and Warner also have the fourth-best partnership tally among Australian men’s cricketers in ODIs.

Finch’s individual laurels are nothing to sleep on either. With 17 tons in 146 outings, he stands fourth on the list of Australian batters with most hundreds in the format. His average of 39 combined with an impressive ratio of 8.5 innings per hundred is up there with some of the bests.

Among Australia men’s batters to have scored a minimum of 2,000 runs, his strike rate is the sixth best, behind Adam Gilchrist, Andrew Symonds, Glenn Maxwell, Shane Watson and David Warner.

He was a leader that led from the front both metaphorically and figuratively. Taking the reins of a battered and morally down Australian side following the Cape Town fallout, Finch inspired them to a remarkable turnaround. Trailing 2-0 to India in India at the start of 2019, his gritty 93 at Ranchi sparked a comeback for the history books as Australia stood around to clinch the series 3-2. In the following series against Pakistan, he hit two successive hundreds and followed it up with a ninety as the Aussies clean swept Pakistan 5-0.

He continued his rip roar form into the 2019 World Cup and guided his team to a surprise semi final finish with a further two centuries to his name.

As the captain of cricket’s most illustrious and successful team he boasts a fair record too having won 31 of his 55 outings. And to put the icing on the cake, he bows out whitewashing Trans-Tasman rivals New Zealand 3-0 on home soil.

Finch’s contributions to Australian cricket are beyond any shadow of doubt, as heavyweight as any over the past decade. Not only was he a redoubtable foe to the myriads of bowlers he took to the gallows as an opener, but he did so with the aggression and the trademark blitzkrieg that had ‘Australia’ written all over it.

But perhaps what defines Aaron Finch’s legacy is how he emerged as a hallowed helmsman amidst the darkest hours of Australian cricket. He took the wheels of a sinking ship and not only just guided it to safe shores but made sure the crew and cruisers lived to see the halcyon days. 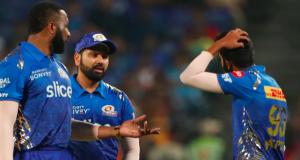 What Has Gone Wrong For The Mumbai Indians In IPL 2022?

Debashis Sarangi - April 24, 2022
0
Mumbai Indians have been going through a really torrid phase in this year’s IPL as the five-time champions...