Imagine a kingdom adorned with the highest-end battalions bulwarking every front the enemies could contemplate on attacking. Needless to say that futile would be their attempts and unscathed would remain the kingdom. What could possibly go wrong in such a kingdom basking in its halcyon days one might ask.

For every such kingdom while looking ever so smooth from the outside is bound to have a few blemishes that are rued upon within its inner sanctum.

With every rank occupied by a champion, the ones vying for a spot from the outside are best handed a consolation prize with the unsaid yet clear instruction of having to wait till the former occupant stands down or is past his prime.

Reading this on a cricket forum you might have already started correlating a list of names in your head. For obvious reasons, no list is complete without Australia’s great quandary– Stuart MacGill. For the eldritch leg spinner was simply a victim of being born in the wrong era. It was an era that coincided with cricket’s greatest sorcerer – Shane Warne.

Being the grandson of Charlie MacGill and son of Terry MacGill, both of who bowled leg-spin for Western Australia. At the age of 6 when he first bowled a leg break with a tennis ball on his friend’s backyard, “That’s a roller. You’re natural”, exclaimed the friend’s father.

If a cytogenetic analysis was to be conducted on the MacGills, who knows the scientists might have stumbled upon a few common genes that coded for the common trait they all shared.

In the year 1994, at the age of 23, he made his debut for Western Australia against New South Wales in the Sheffield Shield. By this time Shane Warne was 25 and was already going places with the Australian side making MacGill’s prospect of a Test cricket stint all the more narrow. To add to the agony, a disappointing season with Western Australia saw the leggie pack his bag and make a bold move to New South Wales.

It was easy for any player in MacGill’s shoes at that point to relapse into a spiral of mayhem and fall into a crevasse. But MacGill ensured that his name didn’t slip off the radar by consistently delivering in First-Class games – a testimony of both his skill and mental fortitude. In 1997, he announced his arrival with a brief, but good, stint for Somerset, and later that year, after moving to NSW, he picked up his first five-wicket haul to get noticed.

Fast forward the summer of 1997-1998, Stuart MacGill finally got his ever so cherished desire of a call-up to the national side. It was the 3rd Test against South Africa in Adelaide. MacGill trumped Warne in the wickets column, picking five-under testing circumstances, signaling the selectors of his dormant prowess along with the obvious epistle that he was no less adroit than Warne.

In the tour to Pakistan later that year in October, the world finally saw a glimpse of MacGill’s full potential. In the absence of Warne, he registered his maiden five-wicket haul in test cricket in the first innings of the Rawalpindi Test before adding another four in the second innings to finish with match figures of 9/113. Things went from good to better as ended the three-match series as the highest wicket-taker trumping the great Mushtaq Ahmed.

In the season of 2002-03, with Shane Warne ruled out of the Ashes with an injured shoulder, MacGill was called back into the Australian Test side. In two Tests, he took 12 wickets.

But thereafter, he proved his worth once again as he finished the calendar year of 2003 as the second-highest wicket-taker with 57 scalps to his name, establishing himself as Australia’s best leg-spinner after Warne, if not better! In the process, he also took his 100th Test wicket, a feat he achieved in games as scanty as 21. It was the fourth quickest for Australia back then only behind Clarrie Grimmett, Charlie Turner, and Bill O’Reilly.

His best outing came against Bangladesh in Fatullah, much to the ignominy of the Bangladeshi batsmen whom he hoodwinked ever so efficiently for career-best figures of 8/108 after a formidable start of 1-238.

The extent of the infringement Stuart MacGill was forced to deal with throughout his promising career is nothing short of a tragedy. The fact that his first 21 games in which he took a record 100 wickets, were stretched across 5 years and 3 months showed how little support he was given by the selectors despite putting on a show all his power cards on the table.

Even in the 16 games MacGill and Warne played together, MacGill outperformed his counterpart in almost all occasions. He picked up 82 wickets at 22.10 from those 16 outings they had together while Warne picked up 71 at 31.0.

Stuart MacGill’s chance of becoming Australia’s first choice did come in 2007 after the retirement of Shane Warne but alas it was too late. He was almost at the twilight of his career at 36 years of age. Painful, numbing nerve damage first in his left and then in his bowling right hand meant he had no choice but to bid adieu to the game he loved which he did in the following year 2008. He rode into the sunset with 208 wickets from 44 test matches under his belt.

But Stuart MacGill did it all right, didn’t he? Play second fiddle to Warne? Check. Successfully replace Warne in his absence? Check. Outperform Warne whilst playing together? Check. So where did it all go wrong? Nowhere.

The team had space for one spinner. But there persisted a dilemma of choosing between two high-end products of the same genre, inseparable by conventional statistics. It was just that the only option the selectors were left with was to go with their gut feeling and they happened to go with Warne and Warne happened to give them the returns they wanted.

Given his alleged anger issues and the unfairness, the game of cricket served him with, its pretty mainstream to assume that he would have a heart full of regrets and animus towards the thorn on his path- Shane Warne. But that is not the case at all. When asked about his career achievements he said, “I would have loved to have played 100 Test matches. I think my life would be a little different if I had, but if you look at the game historically, 44 Tests is plenty. Forty-four Tests and 200 wickets – I’m very happy with that”

We didn’t see Stuart MacGill smile much in a cricket field. He wasn’t the kind infatuated with looks or obsessed with the perfect hairstyle. Loose-fitting full sleeve shirts, no raising of the collars nor any fancy sunnies – all bore testimony of his engrossment in the game and the art of leg-spin alike. He didn’t like talking to the captain about field placements or work on ideas. He just wanted to bowl.

He had a zen state of mind invaded only by confidence yet not touched by hubris. He didn’t like watching cricket and would rather read a book even in the dressing room. He strode in, didn’t jump, and delivered the cherry with a sort of round arm, exhaustive action albeit a scientifically effective one indeed. Some turned just enough, some turned square. Some pitched perfect, some were full. Some bounced high, some turned wrong. But what all deliveries had was the last ounce of gas from his self effusive tank.

That was Stuart MacGill. 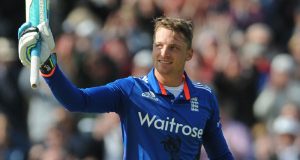 Is This A New And Improved Jos Buttler We Are Seeing?

Siddharth Sharma - June 18, 2018
0
There was a sense of urgency to everything that Jos Buttler did during the IPL. It would soon become a gaping void when he...