There was Brendon McCullum’s 158*, an inning that made IPL an instant hit. Post that came Chris Gayle’s monstrous 175* off just 66 deliveries. We are now already witnessing the thirteenth season of the game’s most talked-about T20I league.

Not a day goes by, you could say, in the conscience of the cricket lover and the ardent T20 fan where the Indian Premier League isn’t thought about.

Cracking centuries, great bowling spells, last over finishes- The IPL has done its fair bit to popularize the sport’s much-followed format of the current era.

But at the core of its popularity rests the dominant theme that’s endeared it to millions.

Youth. Finding young names, and talents that go on to forge their own futures. That grind that one goes through to ultimately play a part in lifting that, which belongs to the team.

So ever wondered about the following?

The phrase which is written in the IPL trophy in Sanskrit means ‘Where talent meets opportunity’.

Every IPL season brings new opportunities to the table with cluster headaches for the Indian selectors.

All these young cricketers are sweating hard in hot and humid conditions in the UAE to prove their worth and to showcase their talent to the cricketing world.

It’s been an amazing journey since 2008 but in between several cracking knocks, we also saw a magical inning by a youngster who announced himself to the world.

Paul Valthaty, a Mumbai-based cricketer who played for the IPL franchise Kings XI Punjab in the IPL 2011-2013 season under the leadership of all-time legend & one of the best wicket-keepers in the cricketing history, Adam Gilchrist, alongside some serious clean hitters of the white ball, likes of Shaun Marsh and David Miller.

Not many know, before playing for KXIP, PC Valthaty played a couple of games for Rajasthan Royals in the IPL season 2009.

Paul Chandrashekar Valthaty delivered his bloody best against captain cool MS Dhoni’s Chennai Super Kings in the IPL season 2011, smashed a thrilling hundred (120* off just 63 balls) including 19 fours and 2 cracking sixes. His blistering knock drove him into the limelight plus helped his side Kings XI chase down a mighty target of 189 in 19.1 overs.

It was an inning, that almost a decade back in the day, took center-stage, its author resting only on the power of his bat, with zero shenanigans or mind games to make himself heard.

But it’s also a bit sad that for a talent that arrived mightily, faded out real soon. So much so that probably it won’t be wrong to say not an awful may actually know about his rise to prominence; the journey he covered before hitting CSK out of the park.

Paul Valthaty started his cricketing career at the age-group level for Mumbai in the late 90s. He later got placed in the 2002 Under-19 World Cup team where he got the opportunity to share the dressing room with star players like Irfan Pathan and Parthiv Patel.

“At the beginning of the match because Kings XI Punjab was not known to be that strong a team that edition, we lost our first match very cheaply-the crowd was In Fact cheering for Chennai Super Kings. Obviously Mahendra Singh Dhoni, the great Indian captain was there and we had just won the World Cup. So the crowd was actually cheering against us. But then gradually they realized, “Our home team is winning.”

“You get recognized whenever you go out. People come for autographs and photographs. It felt good. This kind of recognition every sportsman or an artist wants.”

Everything was going in the youngster’s way but injuries and inconsistent performances post-IPL 2011 ruined his career and hopes got over when he got unsold in the IPL season 2014.

Sanju Samson became the emerging player of the year in the Indian Premier League’s 2013 season. He even, thanks to some utterly enjoyable albeit sporadic bursts with the bat, got an opportunity in bits and pieces to showcase his talent for India.

As a cricket fan, we all want to see young talents like Valthaty, in the Blues for the Indian cricket team but due to the high competition not all get this chance to represent the country.

We all cricket enthusiasts have one common question in our minds, did he deserve a few more chances than he got?

It’s amazing that Paul Valthaty played that knock that became his cricketing identity and perhaps also his living bane that he couldn’t do all that much to stay on in people’s minds. But who’s to be blamed?

Could he, then 27 when he stormed to IPL’s headlines, have been handled better? 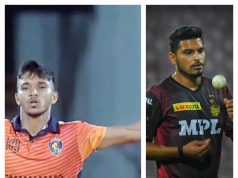 IPL-2021 All Set To Unleash A New Brand Of Youngsters Ready To Take Off!