A true representation of migrancy and cultural displacement has long been the central element of many a literary work in the English language and others as well. Many of Bob Marley’s well-known reggae songs have focussed primarily on the implications of separation from the native land. The process of drawing one’s identity in a foreign land is a difficult process even for a Professional.

But, how do we perceive such post-colonial elements when it has a direct bearing with Cricket?

Whilst Ben Stokes was thwarting the New Zealand bowlers in all corners of the Lord’s in the World Cup Final, there must have been a myriad of diasporic sentiments within him that are difficult to express or explain. Surely, leaving one’s motherland is a difficult decision; it’s hard to imagine the pressures of playing International Cricket against the players from your own native land. Eoin Morgan surely doesn’t find it easy while representing England against Ireland.

We have a plethora of examples to focus on.

Imran Tahir, Eoin Morgan and Ben Stokes are just some of the players who have plied their trade for a country that isn’t their homeland. The reasons for moving to a country with a different cultural background are varied and even defy the need for any sort of discussion.

Corey Anderson, the New Zealand born hard hitting all rounder has confirmed his retirement as a Kiwi Cricketer and has accepted a three-year contract with the Major League Cricket in the USA.

Corey Anderson was rightly touted as the next big thing in New Zealand Cricket when he smashed the long standing record of the fastest ODI Hundred by Shahid Afridi. Back on the New Year’s Day in 2014, he bludgeoned the West Indies bowlers en route a 36 ball hundred thereby eclipsing the record that had stood for more than 17 years. Though, AB de Villiers was quick to break the record when he slammed an outstanding hundred off just 31 balls against the same opposition in 2015. But, Anderson’s power hitting skills and ability to swing the ball earned him a place in the Mumbai Indians Team for a whopping sum of 45 million rupees.

Anderson’s brilliant skills with both bat and the ball were identified very early as he was the youngest New Zealander to get a contract at 16. The stocky all rounder has the unique distinction of representing his country in two Under 19 World Cups. He scored a mature hundred in only his second test match in spin friendly conditions at Chittagong. Anderson had a decent IPL in 2014 for Mumbai Indians and in the 2015 World Cup he scored 231 runs and scalped 14 wickets.

So, where did it all go wrong for him?

An unfortunate dip in form and a tryst with injuries meant that he could represent New Zealand in only 49 ODI Matches and 31 T20 Internationals. He last represented the Black Caps in 2018 and even a contract with the Royal Challengers Bangalore could not save his flagging career.

Stress Fractures, groin injuries and back issues unfortunately plagued his short career for the Black Caps. His decision to move to the USA was also catalysed by the fact that his fiancé is an American National based in the USA.

Corey Anderson’s colourful extravagance while playing brutal knocks is akin to that of Ben Stokes and even Adam Gilchrist. He will probably be playing in stress free environment where there will be minimal scrutiny and pressure to perform. There will even be fewer eyeballs set upon him while he will be playing in a different environment. His presence will surely bolster the Cricket scene in the USA.

But, New Zealand Cricket will miss him.

Though, at least, it must be said the fierce, big-hitting left-hander followed his heart while taking such a hard decision.

And for that and more must we say Kudos Mr. Corey Anderson. 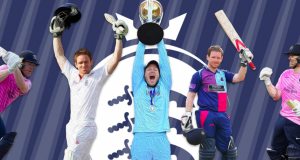 Prashanth Satish - May 24, 2020
1
There is an old and prominent saying “Tough times never last but tough people do!” That resonates quite well with the story of this...