It has been hard playing cricket for Zimbabwe; there have been less rewards, political troubles interfering in the way of the sport and thereby, fewer opportunities to have a go at Test Cricket. But despite battling not so rosy scenarios, Zimbabwe have produced some quality cricketers in past seventeen years, one of which happens to be the current Test captain, Sean Williams. And it appears, under his able leadership the team’s full reformation isn’t all that far around.

At last Zimbabwe played a full series against Afghanistan; the result although might not matter much for they lost the three T20I series by 3-0, but they can take heart from the fact that they performed exceptionally well in the Tests. The score line of 1-1 does not suggest that Zimbabwe were almost on verge of winning. While many reasons could be attributed for their brilliant performances in the Test series, we mustn’t look away from one man who stood out was captain, Sean Williams.

At the time when Zimbabwe cricket was suffering from its biggest crises due to the player strike in 2004, young players were being darted into international cricket lacking proper guidance. Williams was among the long list of young players who were handed international baptism overnight; he was only 18 when he was asked to face the likes of Makhaya Ntini on a spicy Wanderers pitch.

Though Sean Williams could muster only twelve, he showed lot of promise in his next game at Durban scoring a brave unbeaten thirty three. Someone who could hold his ground against an intimidating opponent. That was enough for selectors to mark him as a future prospect.

In his early years, Williams faced temperamental issues, he was also confused to go ahead with Zimbabwe cricket or to look out elsewhere for an alternate career. Imagine the predicament of having talent but also the confusion about what path to forge one’s career around?

On two occasions in 2006 and 2008, Sean Williams declined to sign a contract with the board as the situation in the country continued to decline. The travails of a Zimbabwean cricketer you see.

However, on both the occasions he returned to resume his cricket career.  For Williams it was not about the lack of talent for he showed it on numerous occasions. His seventy one against Pakistan at Multan in 2008 or his fifty nine against Bangladesh at Dhaka in 2009 were scored in tough conditions. In both knocks, he charted himself akin to a foot soldier wary of the opponents and what the situation demanded. Though, it mustn’t be disregarded that while his batting looked solid, in his initial years Williams suffered from a lack of consistency; wherein an impressive innings would be followed by a series of of single digit scores.

The 2012-13 season, it must be noted, was the breakthrough season for Sean Williams. It was the year by when he achieved much-needed consistency in his game. It earned him the much-awaited Test cap in the same season against West Indies. Since then, Williams has gone onto become a key member of the Test side along with the likes of Brendon Taylor, Sean Ervine, Hamilton Masakadza, Sikandar Raza and Graeme Cremer.

These isn’t merely a pantheon of talent; these are pillars of the sport in Zimbabwe around whom the current generation revolves and one that the future generations certainly look up to.

These players have been with Zimbabwe Cricket through its thick and thin. A few of them left but eventually returned back to resume their duties for the national team.

Perhaps what’s also true is this. At a time where several of Zimbabwe’s mainstream comrades are applauded, portrayed as heroes- forget not that they play far more international cricket than their African opponents whether from India or Australia- in sticking with the sport in Zimbabwe and serving it for well over a decade, the likes of Sean Williams must be looked as national heroes.

2015 saw Williams taking his game to the next level; he scored runs on consistent basis and also picked wickets at crucial junctures. He ended up scoring 339 runs in six matches at a staggering average of 67.80; in addition to it he picked 7 wickets as well. But cricketing journals ever obsessed with glowing figures from the wider world perhaps didn’t highlight the feat as much as they should have.

Next year, the left-hander smashed his first Test hundred against New Zealand in what was a lot cause.

In 2020 came a newfound challenge to his cricket. Williams was appointed Zimbabwe’s Test captain and since then, he has lifted his game to next level scoring three centuries in consecutive Tests. His hundred on a tough pitch against Afghanistan showed how much he has improved as a batsman and his 151* in the second Test was an example how tough a cricketer he is both mentally and physically.

Forget not that they’re an opponent that challenges the authority of bat attacking it with talents that resemble an artillery engaged in constant cross-border firing.

It’s been sixteen years since Williams started his international cricket sojourn. Over the years he has experienced a bumpy ride. Some good moments were followed by series of rough ones. During his era, the youngsters didn’t have any senior player whom they could trust their careers for guidance; they learnt it by themselves but today Williams is ready to guide the youngsters who are coming through the ranks.

But this quality star of Zimbabwe knows the value of his own role apart from that of his pre-eminent contemporaries- Brendon Taylor, Craig Ervine, Sikandar Raza and Kyle Jarvis who need to guide the new crop of promising players so to ensure Zimbabwe’s generation-next is ready to carry the mantle.

What matters most for Williams is that he’s also looking forward for crucial Test assignments apart from some of the major global tournaments where he would want Zimbabwe to qualify and showcase their talents to the international audiences at the highest level. The big target would be to qualify for the 50 over World Cup in 2023 in India, a tournament they missed out on the last time. 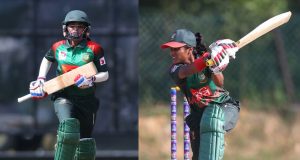 Shruti Banerjee - December 7, 2019
0
Cricket returns after 8 years in the South Asian Games which is currently taking place in Nepal. While the men's tournament has featured under-23...