Cricket is known for always promoting young talents. There are plentiful examples of those who started their international journey early, in some cases, in teenage years. At the same time, we have players who underwent the grind in the domestic circuit for over a decade to make it to the national team.

But how does it feel when you have runs under your belt and have been a consistent run-getter in the domestic circuit as well as T20 leagues but still could not break through?

Australia’s left-handed wicket-keeper batter Dr. Georgia Prue Redmayne can answer that well. Making it to the national team after six years since your debut is the next big thing after graduating from medicine from the University of New South Wales.

The Brisbane Heat keeper-batswoman worked hard on the frontline when Covid-19 hit Queensland. She served as a doctor at Tweed Hospital on the border between New South Wales and Queensland before heading to the 2020 edition of the Women’s Big Bash League.

Isn’t it amazing? Serving your country on-field and off-field is not everyone’s cup of tea after all. But Dr. Redmayne persisted.

It was only five years ago that she actually began thinking about quitting the game due to a prolonged challenge of juggling between the sport and being buried amid medical books.

“I was halfway through studying my six-year degree at UNSW,” she had said earlier.

“I was in Sydney and played a lot of cricket there having gone underage pathways with New South Wales, who are a very strong statestate. I was a reserve wicket keeper in the New South Wales squad behind Alyssa Healy, so I was doing a lot of the training and trying to balance uni at the same time. I wasn’t getting much game time and I was thinking whether or not I should just focus on being a doctor and become just a club cricket,” she’d add.

But thanks to former Australian wicket keeper Julia Price, who motivated her and didn’t allow her to give up easily, and here she is with her maiden call-up for the national team.

Australia, recently announced an 18 member squad for an upcoming Australia women’s series against India, and the 27-year old Georgia Redmayne, who made her debut in 2014 for New South Wales breaker in WNCL has been finally handed her first international call up.

Her constant struggles have finally paid off. Make no mistake. Hers has been a six-year-long wait to don the national jersey, but those years were no less than a roller coaster ride.

From playing backyard cricket to becoming WBBL’s regular feature, Redmayne has come a long way. Before making her debut in 2014 for the New South Wales Breakers in WNCL, she played plenty of university/school matches.

One of the most unusual and exceptional moments that I have read about her belongs to February 2005. Back in 2005, Dr. Redmayne made it to the headlines of ‘The Daily Telegraph’ as she took a double hat trick (4 wickets in 4 deliveries) while playing for the Alstonville Maroon Under-12s.

4th ball: Lofted into the safe hands of the covers fielder!

The 13-year-old finished the carnage with 5 wickets from 3 overs, including two maidens and just one run conceded.

That was just the beginning, the best was yet to come, but this time, with a bat.

August 2014: Redmayne was finally rewarded for her efforts as she was added to the New South Wales Breakers squad and made her debut for them in the 2014-15 WNCL final. However, she did not get much exposure in New South Wales due to the presence of Australia wicket-keeper batswoman Alyssa Healy. But little did she know what surprises 2016 was preparing for her?

September 2016: The Lismore-born moved from the Breakers to the Tasmania Roar in the 2016 season of WNCL and justified her decision of moving by becoming the first-ever player for Tasmania to hit a WNCL century. Thanks to her praiseworthy efforts, the Roar managed to win a last-ball thriller against ACT Meteors.

October 2016: The Tasmania left-handed batswoman continued her red hot form and smacked a magnificent 116 against Western Fury to lead her team to a six-wicket victory. The ‘First Grade Player of 2015-16’ award winner ended the 2016-17 WNCL season as the fourth-highest run-scorer, with 295 runs in 6 matches at an average of 59. Three beautiful catches and seven dashing stumpings were the cherries on the cake.

On the back of her excellent form in the domestic circuit in 2016, she was recruited by the Hobart Hurricanes for Women’s Big Bash League 2016-17. She stayed with them for the next three consecutive seasons and was transferred to Perth Scorchers in the WBBL 2019. Currently, she is with Brisbane Heat and will feature for them in the upcoming season of the WBBL.

Yet, what surprises one is how these numbers haven’t yet proven enough to get a national call-up.

It’s common knowledge that Australia have Allysa Healy and Beth Mooney, two amazing talents who already are stars by virtue of consistent, match-winning performances. Though, knowing well that her chances of making the cut would take time or occur, for instance, at the back of an injury to one of the either, Georgia Redmayne has been relentless as one must be.

Until 2019-end, she knew she had a lot to prove as a complete batter on the field as mere wicket-keeping skills won’t assure her a place in the national team.

February 2018: Redmayne won the ‘Betty Wilson Young Women’s Cricketer of the Year’ award as the most promising rising player. It was a well-deserved reward for a blistering-12 month period that saw 413 domestic runs, eleven catches, and one stumping.

And here comes the best of Georgia Redmayne.

After previous stints with New South Wales Breakers, Tasmania Woman, the wicket-keeper was recruited by Queensland Fire for the 2019-20 WNCL season. As the Fire already had the services of Beth Mooney and Josephine Dooley, Redmayne knew she was signed on the back of her astounding batting skills.

March 2021: And finally in March 2021, Dr. Redmayne played a hell of an innings for Queensland and asked Australia management a bunch of questions with her bat regarding her spot in the national team.

Now, these numbers were more than enough to allow a 27-year old wicket-keeper batter to show her destructive batting skills on the international level.

August 2021: On the 18th of August, Dr. Georgia Redmayne finally received a maiden call-up for the national team along with Alyssa Healy and Beth Mooney, two other wicket-keeper batters in the squad. But this time, the 27-year old has been signed on the back of her batting skills and she is expected to perform the role of a complete batter in the upcoming home series against India.

A girl who started playing backyard cricket with her brother and dentist father has proved that dreams do come true if you have courage to pursue them. It might take you a week or a month or years but it will come true. You just need to hang in there, remain persistent and determined when things aren’t falling into place just like Australia’s Dr. Georgia Redmayne did. 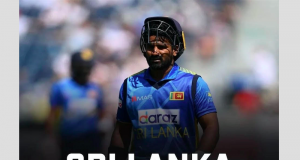 Who Is Responsible For The Downfall Of Sri Lankan Cricket?

Abhinav Bose - July 6, 2021
0
The exaggerated enthusiasm in the commentary of Tony Greig served as a beautiful background when Muttiah Muralitharan would be spinning out oppositions amidst frantic...