The Australians are always winning. Well, mostly, if not always. The English are ever strong. Too big a side to be taken lightly. India challenge the authority of the best in the women’s sport, much like the White Ferns. The Windies surprise and pack a few punches when familiar inconsistencies don’t play spoilsport. What about the Proteas women?

They inspire. They play, lose, win, and at times, do plenty of that. They get their hearts broken. Think the 2017 ODI world cup. They breach the semis stage and play glorious cover drives in T20 world cups. 2020 Down Under was a fine example.

But neither do they take their wins to their heads nor do they let defeat break their spirit. And in continuing to persevere as only they can, the Proteas women march on ahead.

They do that beyond the capacity of their naysayers and unrestricted by the limits of praise and plaudits. And for a side that perhaps etched the headlining shot of the T20 World cup (2020), with Mignon du Preez nailing Katherine Brunt over deep mid wicket for a towering six, the Proteas women continued their good work this year, playing passionate cricket world-over with quintessential togetherness.

While 2021 meant different things to different teams, for instance bringing back Deandra Dottin to the big stage, unfurling Thailand in a way none had imagined, whilst seeing Australia ace ODI cricket, the year did underline the very best the Proteas women had to offer.

A side that welcomed the challenge of Pakistan visiting their shores, the Proteas women under Luus’ captaincy seemed an impregnable wall becoming ever too staunch a challenge for Javeria Khan’s unit to breach.

First, a sensational three-for by Shabnim Ismail let the hosts defend a lowly 200, of which Kapp alone compiled 47. Then, Lee, Kapp, and Luus helped steady a slow start in the second contest to help the side put a competitive 252. An unsettled Pakistani line-up with the top three (Naheeda, Omaima and Muneeba) contributing only 49 never really looked capable of chasing down a decent score that eventually seemed an unreachable one. Although, Dar and Riaz’s glorious, nearly game changing fifties kept Pakistan in the hunt, Khaka’s incredible spell of 4 for 40 off her quota of 10 overs did the trick.

In the end, South Africa took a morale-boosting 2-nil lead with three games to go. The series-win came in the next game, where Lee and Wolvaardt were found piercing boundaries on either side of a slow Durban pitch. But even a middle order failure with Luus, Goodall, and Brits making no more than 19 couldn’t slow down the hosts’ tempo despite Diana Baig’s valiant efforts.

In the end, Pakistan would be bundled out for 169 with Luus, Ismail and Khaka suffocating Pakistani batters under a barrage of dot deliveries, each taking three wickets apiece.

That is how the ODI whitewash of Pakistan came about courtesy the Proteas women playing to their brute and collective strengths, utilising great 50 over form in the T20Is that’d follow.

Whilst Brits struck two matchwining fifties on the trott, and in the process revived what had been a rather lacklustre career much to the delight of home fans, the final T20I saw a slight niggle for the hosts.

Javeria Khan‘s timely intervention with the bat (56 off 50), a true captain’s knock with the lowly form of her team at the background could certainly have motivated the right hander to come to Pakistan’s rescue. Though one was glad that happened, what Pakistan couldn’t stop, however, was the Proteas women winning the T20Is 2-1 much to the delight of home fans.

Later, the Proteas women toured India minus Dane van Niekerk but it didn’t seem to impact the collective strength of a side that took to Lucknow with one intent and one alone. And it was to leave the Indians stunned and in turn, the hosts baffled by what was to come.

Never in the past decade and a half of playing international cricket had South Africa ever beaten India in India. But as they say there’s a time for everything so 2021 produced firm Protea magic on the cricket-obsessed bylanes of India that unsuspectingly tickled a sleeping giant by hosting it for a white-ball series.

The end result was the Proteas women smashing India 4-1 in a five-match series as Lee, Wolvaardt, and later, du Preez and Brits joined hands to dismantle a bowling attack that seemed banal, lacking imagination even.

While India’s Punam Raut provided some answers with the bat for India, Lizelle Lee left little to the imagination in going big in the ODI series. By the time the 3rd ODI hit fans, the series already tied at 1-1, the fiery right hander took things into her command plundering a 132, scoring sixty percent of her side’s tally.

The fourth ODI saw the vanguard of Proteas batting Mignon du Preez hold centrestage spoiling the party for India’s Punam Raut (104) as the dogged right hander took her side home thanks to a fine 61 off just 55. Whilst Lee and Wolvaardt had already compiled a 116-run opening stand, it was du Preez’s firm handling of the run chase (267) in the middle order that kept South Africa in the hunt.

The fifth game too was an easy win right after which one saw three brilliant T20Is happen on the very turf where by the conclusion of the one-dayers the visitors had grown confident and ever so consistent. Where the ODIs were determined by the pounding of Lee and Laura’s blades, the T20Is belonged to the charismatic Anne Bosch, a true find of Proteas women.

A cautious aggregator up the order, Bosch, an ever-agile fielder wherever put to patrol the field also chipped in with her handy medium pace, bagging 3 wickets and rallying around Ismail’s 4 from three contests. A vital, match-winning fifty from Bosch also became a highlight of what eventually turned out to be a one-sided series.

That being said, the series that truly highlighted the might of the Proteas women was their successful tour to the West Indies, which in essence could’ve been difficult- but wasn’t – since there was no Stafanie Taylor, the Jamaican out injured.

A void, a vacuum, call it what you may. But for the visitors, it ushered a sense of belief that the onerous could be attained and so it was as Lee and Wolvaardt and then, du Preez joined hands to put on the mighty runs on the board, something the Windies just couldn’t replicate with the bats.

With Hayley Matthews’ not in the best of forms and Deandra Dottin only managing a brute (often odd) hit here or there but nothing substantial, when the going got tough for the Windies batters, the Proteas kept going, truth be known.

And in the end, sticking together and playing their ultra competitive brand of aggressive but fair cricket helped the Proteas women usurp the big-hitting Windies, who on this occasion, never seemed that big for the South Africans.

Having said the above, if there was ever a time in their cricketing history where the batting and bowling departments seeme in harmony and great balance then this is it. It’s 2021 and the batting order oozes class and might. There’s Lizelle Lee, the tireless hammerer of runs. Then the woman who plays the world’s most gorgeous cover drive- Laura Wolvaardt.

Kapp’s back and it’s a threat to the best in the world who’d like to contest the Proteas women understanding a warning written in caps-lock “on.” And it’s that the moment you throw in there the quartet of Ismail, van Niekerk, Khaka and Luus, the team becomes an almost impregnable fortress to breach.

Forget not then, that the bulwark of the middle order is still going strong and flowing like cool breeze. Her job’s to gather timeless runs for her nation. Her name- Mignon du Preez! 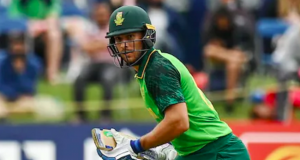 Majestic Malan Reignites The Protea Fire As Another Fire Of Fear...

Pranay Rangra - July 17, 2021
0
Make no mistake, South Africa is reeling. Reeling with tears of torment, cries of anguish and the word which keeps life moving called future under...