After winning the 2013 Champions Trophy, India have reached the semi-final of every ICC tournament. Yet, somehow, every time they’ve faltered at the crucial junctures. No wonder people have started terming them with the ‘C’ tag along with South Africa. India are brilliant throughout the group or the league stages and come the semi-final or the final, they stumble and bow out of the tournament.

The 2019 World Cup wasn’t any different. India topped the league stage where they won seven out of the nine games and their only loss in the tournament came against England (there was a washout against New Zealand). Yes, there were a couple of tight games where they held their nerve and survived a scare. But they did look like one of the best teams in the competition.

When the semi-final line-ups were announced, everybody was expecting an England-India final. And why not. These two teams have been the best in the four-year cycle between the two World Cups. England had a win-loss ratio of 2.52 which was the best. India were the second-best with 2.07. South Africa were the only other team that had a win-loss ratio of more than 1.5. Hence, an England-India final was expected.

However, it wasn’t to be. While England lived up to the billing, India faltered and crashed to their second successive World Cup semi-final exit and fifth consecutive knockout (semi-final or final) exit. It were New Zealand that broke India’s dreams.

It was a peculiar semi-final, one which spanned over 28 hours. With the rain playing spoilsport at the Old Trafford in Manchester, the first day saw 46.1 overs of the semi-final before the game was resumed from where it stopped on the next day.

You could say Kane Williamson won an important toss and New Zealand batted first. As they did all tournament, India started brilliantly with the ball. Jasprit Bumrah stood out and was well supported by Bhuvneshwar Kumar. In the first four overs, New Zealand’s score read 2/1 with Bumrah removing Martin Guptill.

Skipper Williamson’s arrival calmed the nerves in the New Zealand dressing room. Along with Henry Nicholls, he bided time at the crease. The runs didn’t exactly flow but the duo made sure that they didn’t lose any more wickets. In fact, the Blackcaps could muster just 27 runs in the first 10 overs. However, as the duo got set, the run-rate started to rise, slowly but surely.

Ross Taylor joined Williamson in the 19th over after Ravindra Jadeja knocked over Nicholls. The rotation of strike became a lot better with the odd boundary here and there. In the process, the two-most experienced Kiwi cricketers got the innings back on track. India never allowed the run-rate to go out of hand and kept the run-flow in check all along. They also picked wickets at regular intervals.

Barring Williamson (67) and Taylor (74), none of the Kiwi batsmen looked settled at the crease. None of them even crossed the 30-run mark. Such was the control of the Indian bowlers. Yet, New Zealand somehow dragged themselves to 239 in an innings that spanned across two days. The last 23 balls that they faced produced 28 runs on the second day when the game resumed.

India definitely had the upper hand going into the innings break. With the batting line-up that they had, they would’ve eaten up 240 for breakfast and the top three had been in prime form as well. Before this semi-final, Rohit Sharma had scored 647 runs with five centuries. Virat Kohli had a run of five successive half-centuries and had amassed 442 runs. KL Rahul had made 360 runs. There was no way India couldn’t be favorites at the start of the run-chase.

If New Zealand were to have a sneak in and get on top, they had just one. That was to knock over the Indian top three early. In fact, that’s been the pattern of India’s losses in the lead up to the World Cup. Every time India’s top three fell early, India lost. There were barely a few instances where India’s middle-order bailed the team out when India lost three early wickets.

With the morning freshness of the pitch, the Kiwi fast bowlers wreaked havoc and made full use of the conditions. With a little bit of nip around, Matt Henry and Trent Boult ran through the Indian top order in a jiffy. Before India could even blink, they were in tatters at five for three. Rohit, Kohli, and Rahul were all back in the hunt. It all took 19 balls for Henry and Boult to make the plan work and see the back of the famed Indian top three.

Rohit and Rahul were out caught-behind to Henry who pegged away consistently outside the off-stump. On the other hand, Kohli was undone by an in-dipper from Boult. He was given out LBW in a dicey call which he eventually reviewed. However, the umpire’s call was upheld as the ball-tracking showed the ball clipping the top of middle-stump to agonize Kohli, the Indian dressing room, and the millions of fans all over the world. His disastrous World Cup semi-final continued.

At 5/3 all hope seemed lost, MS Dhoni, India’s crisis man was held back and he came in at No. 7. India sent in Rishabh Pant and Dinesh Karthik at No. 4 and 5 respectively as India’s middle-order muddle and merry-go-round continued. Karthik fell to a fine catch by James Neesham as India ended the powerplay on 24/4.

Pant was joined by Hardik Pandya. While the young duo stabilized the innings, the runs were hard to come by. They put on 47 runs for the fifth wicket which came in 77 balls. Pant lost patience and holed out in the 23rd over while Pandya went through the same fate in the 31st over. When the sixth wicket fell, India’s scored read just 92.

Ravindra Jadeja joined Dhoni. The game seemed dead and buried. India still needed 148 runs from 117 balls and the last recognized batting pair was at the crease. Yet, India believed. It was Dhoni’s presence that made them believe. Jadeja started the counter-attack and Dhoni played perfect second fiddle. The former Indian captain held one end up as Jadeja took calculated risks to keep the ‘Men in Blue’ in the hunt.

India reached 150/6 in the 40th over as the Dhoni-Jadeja fetched 58 runs in the 30-40 over phase. It was Jadeja who was doing the bulk of the scoring. India still needed 90 from the last 10. The Saurashtra all-rounder kept going and brought up his 11th ODI half-century. The work was still incomplete though. India did find the boundary regularly but the Kiwi bowlers found ways to chip in and squeeze in some tight overs.

With 42 required from four overs, Henry bowled a brilliant 47th over, conceding just five. That mounted the pressure on Jadeja (77) who fell to Boult in the 48th over, trying to catch up with the required rate. His dismissal left Dhoni a mountain to climb. 31 were required in the last two overs with the penultimate over being bowled by Lockie Ferguson.

The feeling went around the Dhoni might’ve left it a little too late. He should’ve gone out on the attack with Jadeja. However, Dhoni has pulled off miraculous wins and it was barely a couple of months ago that he almost hunted down 26 runs in the final overall by himself in an IPL game. And with the final over to be bowled by Neesham, Dhoni would’ve fancied his chances.

The Ranchi wicket-keeper started off with a six over backward point and brought it down to 25 off 11 balls. But as fate would have it, the master finisher was run out a couple of balls later, courtesy a magnificent throw (direct-hit) by Guptill from deep square-leg, ending India’s hopes and dreams. Eventually, Virat Kohli and his men fell 18 runs short as New Zealand made their second successive World Cup final.

To be fair, the game looked beyond India after 19 balls when they were reduced to five for three. But it because of Jadeja and Dhoni that brought India back in the game and gave them a chance.

It’s been a year since that heart-breaking semi-final defeat and it still seems to hurt the Indian fans. The Rohit caught-behind, the marginal Kohli LBW, the Jadeja knock, the run out of Dhoni, it still seems very fresh in the minds of the fans. But the way New Zealand bowled and fielded, they looked the better team. 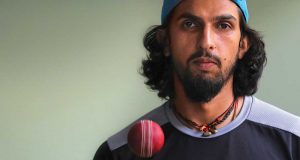 How Has Ishant Sharma Fulfilled His Promises And Therefore, Risen In...

Abhishek Srivastava - September 3, 2019
0
It was the year 2006 and India’s U19 team was touring Pakistan for what was expected to be an engrossing series between the future...