Last evening a beautiful Gaddafi Stadium in Lahore covered by a blanket of fog With dusk seamlessly transitioned into the night sky, saw the Proteas play Pakistan for the one final time.

What a tour this has been for South Africa, a learning curve of epic proportions.

The cream of South African cricket that represented the Proteas in the test whites were all but tested to the limit and unfortunately meekly surrendered losing the battle two nil.

Any adjective that severely connotes losing would be an understatement to how badly South Africa performed in the whites.

This was followed by a quick three match T20 series which happened in a matter of just four days, all held at Lahore.

With Australia scheduled to travel to South Africa, the Protea Management had kept a reserve outfit for the T20 series so that their stars could go back home and prepare for the big Baggy Green challenge.

Yet, what happened with the Australia tour,  with a well-set itinerary being simply struck off from plans stroked grief for the true fan and also warrants greater introspection on just how things pan out nowadays with the eminent and powerful boards.

Anyway, coming back to the T20 series, a reserve squad and not ‘second-string’ as some writers put it, took the field in which barring the veteran David Miller, no one had played over 30 T20Is, and only Tabraiz Shamsi, Reeza Hendricks and Andile Phelukwayo had lined up in more than 20.

The captain, Heinrich Klaasen, had been a part of just 13.

Despite being low on experience, the fight they showed in not abjectly surrendering the series to Pakistan despite going down 2-1 was worthy of every praise.

A lesson for the more experienced test team, possibly?

Yes, they matched the Men in Green toe to toe for the most part of the three-match series with claiming the second T20 quite comfortably.

The first and third were also closely contested with the Proteas slightly taking their foot off the pedal in crucial moments.

In the first T20 South Africa lost a bit of momentum between overs 6 to 10 where they only managed 15 runs chasing a steep target of 170 and still came just four runs short taking the game to the last ball.

In the third T20 despite being 48 for 6 when most of the top order lost wickets to silly shots on a turning pitch, the veteran David Miller through his swash buckling innings of 85 not out still got the Proteas to a respectable 164.

Yes, Pakistan did win this in the penultimate over due to some bad death bowling by the Proteas albeit the game for the large part was anyone’s to call.

In truth, one would be seriously impressed by the fight this young Proteas outfit has shown, led by skipper Klaasen who seemed much more in control of his troops and had better match awareness in key moments than his test counterpart, Quinton de Kock.

Some of these players who have stood out even as South Africa the unit went down deserve a mention:

• Opener, Reeza Hendricks with a total tally of 98 runs has been the glue that has held the Proteas innings together for the better part of the series.

• Tabraiz Shamsi with six wickets in the series going at less than six to the over has simply been magical. The joint highest wicket taker in the series with his fellow countryman Dwaine Pretorius.

• Dwaine Pretorius with his 5 for 17 in the second T20 all but sealed the game for the Proteas. The best bowling figures ever by a Protea in T20.

• Last but not the least, ‘Killer Miller’ who played one of his important innings of 85 not out made sure the Proteas were not warming the engines to fly out yesterday itself.

Seeing the way Proteas Cricket has gone off the radar in recent years, this T20 performance by these young Saffas gives me much hope.

With Pakistan coming to South Africa for a return tour in a few weeks comprising three ODIs and four T20s at the Highveld, bitter sweet revenge would surely be on the cards.

A welcome off the field is certain, but on the field, well you wouldn’t think so! 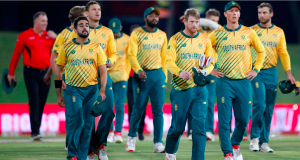 Amid Wavering Fortunes, Proteas Stood Tall As 2021 Draws To A...

Pranay Rangra - December 13, 2021
0
South Africa is the only country in the last one year that has been marred by external forces...