The great legend from India, Sir Sunny Gavaskar, in appreciating Brian Lara’s 400 not out, circa 2004, wrote a column in an Indian daily and lavished praise at the Prince of Trinidad asking his readers, “Where were you when Lara became the first-ever cricketer to score 400 runs?”

Seventeen years later, a moment as mesmeric in international cricket, perhaps even more significant in that it sparkled the women’s game unfailingly beckons a similar question:

“Where were you when Gaby Lewis became the second-ever Irish cricketer and the first from the women’s team to score a T20I century?”

Records come and ago, but often it’s the platform on which they were scored that marks them as truly special. That Gaby Lewis hit a blistering, heart-crushing 105 off just 60 deliveries in a world cup qualifier event makes the achievement as staggering as its statistical high.

There are some incredible dates in Irish cricket that can’t and shouldn’t be forgotten. For instance, March 2, 2011. At Bangalore, when Kevin O’Brien engineered a high-class century, a 113 off just 63, Ireland beat England in a World Cup event for the first time ever.

There have been some somber dates as well.

Consider September 7, 2019, where Ireland saw Kim Garth, a legend of the sport, turned up for an international for one last time, a talent who today, is plying her trade Down Under, thousands of miles away from the land, which was the Titanic’s last port of call.

But in a titanic effort, nonetheless, one of Irish cricket’s mainstays, Gaby Lewis, fashioned a moment in Irish cricket that won’t be forgotten; not for the eventual result, which places Ireland right on top of the women’s T20 world cup qualifiers and definitely not for the heart-thumping beating the German bowlers received on August 26, 2021.

Remember the date as also the genius behind it.

Drafted into the national set-up when she was merely 15- read that again- Gaby Lewis, who’s already rubbed shoulders with the greats- think Lanning, Taylor, Perry, Mithali, Harmanpreet, Goswami, Stanfanie, du Preez– is rising as an inspirational figure for the girls wearing light green.

There are multiple reasons for it.

It’s one thing to cut your teeth in international cricket at a young age, but something quite other when you already become a force to reckon with all at 20.

For Gaby Lewis, 62 of whose 105 runs came just through hits to the fence at Murcia, Spain, made a solemn resolve to serve Irish cricket before she entered her teens.

If that’s not inspirational, then what is?

But for one of Dublin’s finest gifts to the Irish team, cricket was a way of life, not a feature of a special conversation at dinner parties or get together with friends; her father, Alan, and her grandfather, Ian, both represented the country’s men’s team.

Moreover, her older sister, Robyn, too played alongside Gaby Lewis at both club and international level.

It helps when you have family entangled with the sport you ultimately break into, but how you break into rests only and solely on your exploits.

Even before Garth left the side, which was a year and a half after the iconic Joyce sisters of Ireland had already called time on their careers, Gaby Lewis had already become a permanent fixture of Irish women’s cricket.

Up to this point, the tall right-hander, has gone on to hit-not accumulate- runs freely standing achingly close, actually 45 runs shy of what might be her second-biggest career milestone- 1,000 T20I runs.

So far, she’s collected 500 of her 955 runs only through boundaries, which is no random ‘to-be-ignored’ fact, but a telling example of why Gaby Lewis is so highly rated.

The occasional leg-break bowler, who’s so far, collected 13 wickets stands head and shoulders above the rest in her team where her boundary-hitting percentage stands.

Her noted captain, the daring Laura Delany, from 69 T20Is has hit 54 boundaries, while the iconic Kim Garth herself has struck just 54 fours from 46 T20I innings.

How others view Gaby Lewis?

Gaby Lewis, meanwhile, has already powered 125 hits to the fence, some of which have been clobbered with immense power for a lanky batter who’s no Deandra Dottin-esque force you’d think.

Two years back in time when the venerable ICC did a Gaby Lewis-exclusive showreel, it highlighted the words of the great Clare Shillington, the legend with a breathtakingly long career- 19 years and 195 days. The 1981-born said of Lewis, “She’s a phenomenal cricketer, extremely aggressive and an outstanding athlete… one who is extremely tough.”

The woman with the longest career for an Irish cricketer wasn’t bluffing.

Just that the Anuradha Doddaballapur-led German side learned the truth the hard way as Gaby Lewis massacred the likes of Emma Bargna (3 overs, 39 runs), Anna Healy (2 overs, 24 runs), and Sharaanya Sadarangani (3 overs 32 for 1) with the long handle of her bat.

That it’s just the starting of the series and Lewis has already powered Ireland women to their second-highest ever T20I score speaks volumes of intent and points to the ‘what-might.’

What can be said is that in the most unpredictable format, Gaby Lewis’ might will be one of the stand out factors for all.

Be on alert. Gaby’s cut loose. 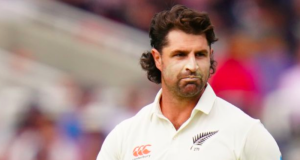