World cricket is replete with famous surnames; identities that have given the sport milestones and countlessly entertaining moments. Within a fraction of a second of taking the Waugh surname, you are reminded of the ice-cool leadership of Steve Waugh, arguably the greatest Australian captain of all time. And at the same time, you cannot forget his brother Mark, the signature of unmatched elegance in batting. Likewise, the moment someone says Flower in the context of cricket, you are reminded of both- the graceful Zimbabwean batsman as well as his incredibly talented elder brother- Andy, who besides being an exemplary batsman was an inspirational leader.

This isn’t to say that things are any different in the women’s sphere.

The surname Blackwell, cannot possibly remind us of anyone else other than hardhitting Aussie duo of Alex and Kate- the former an iconic specialist batswoman and the other, a fine talent who represented the bastion of excellence for 51 internationals.

In similar vein, there’s much to note about a famous Irish surname in the realm of the sport: Delany.

For when you take the name of Delany, you are instantly reminded of the great Laura of Irish cricket; a highly competitive cricketer responsible for no fewer than 1428 international runs along with 58 international wickets.

It’s precisely here where there lies a bit of interesting conundrum of sorts if one were to put it like that.

The phrase Delany does- but shouldn’t- remind one of the only notable talents from the firmament of Irish cricket. If spelt a touch differently, should one use Delaney, with an ‘e,’ it would lead one to none other than Rachel.

Though to admit with a pinch of salt, what one mostly recounts and without much ado is the dependable Irish batter Laura Delany. Not an awful lot – or so it seems- is reserved for Rachel Delaney.

However, the two essential talents of Irish Cricket, one noted widely and the other perhaps not too much, are as different as scorching and early morning dew.

Rachel Delaney- who’s just turned 25 on May 5, 2022, is an off break specialist and arguably speaking, one of the finest exports of Dublin to the realm of Women’s game

She was all of 20 when she marked her international debut. But she arrived in the sport, which was half a decade back, amid overwhelming challenge. For Ireland were competing in a quadrangular series that also featured Zimbabwe, who were nearly as powerful a side as them, if not more.

Then, there were the mighty Proteas and India, teams laden with an assortment of extraordinary talents: Mandhana, Du Preez, Harmanpreet, Mithali, Veda, Luus and Kapp, to quote a few.

That said, the maiden ODI, against India, may not have served tremendous success or anything of that count. But it took Rachel Delaney just a couple of days from May 7 (2017), to leave her impact in the game.

The Irish selectors and her captain, Mary Waldron would would certainly have breathed a sigh of relief on May 9 given Rachel Delaney’s exploits.

Perhaps it may not be wrong to state that the only positives- and there were just a few- from Ireland’s contest against Zimbabwe, one they’d lose by six wickets was Rachel Delaney’s off spin.

For other than Shauna Kavanagh’s fighting fifty, the only lone spark for Ireland was Rachel Delaney’s wonderful spell at Potchefstroom.

On a pitch where the likes of Amy Kenealy and Lara Maritz found it hard to contain a Zimbabwean order, Rachel Delaney’s accurate and tightly controlled off spin earned her deserving plaudits.

It’s one thing to bowl an economical spell but something quite other, truth be known, to emerge with a spell that reads – 10 overs, 4 maidens, 21 runs and 2 wickets when it’s just your second ODI.

Moreover, Delaney got the prized wicket of Modester Mupachikwa, one with 600 plus T20I runs for Zimbabwe.

In a contest where no fewer than seven bowlers were deployed by both sides to subdue batters, Delaney gave an excellent demonstration of bowling under pressure. This is when she was a cricketing newbie.

She’d concede no more than a single extra

Among her wickets was also a certain Chipo Tiripano, who boasts of a T20I batting average touching 30.

Then, ten days later, Rachel Delaney would give further indication of her brilliant spin talent in removing the big wickets of Du Preez (the highest ODI and T20I run maker for Proteas) and Kapp in a fine spell that yielded a memorable 3-for.

In a series where the bigwigs were contesting for glory, here was a newcomer making her mark in perhaps the most arduous circumstances.

However, this is where the Delaney tale turns strange. Much to the surprise of those who witnessed the arrival of a promising spinner, one that could have lent power and balance in a line up featuring Shauna Kavanagh, Sophie MacMohan, Gaby Lewis (to name some of the finest with the ball), Rachel Delaney hardly got any chances following the 2017 quadrangular series to build on what was a fine start.

It’s a bit strange or perhaps even mind boggling that all Delaney has gone to play since the May 2017 event are no more than 6 ODIs and 4 T20Is in all.

In her most latest T20I appearance, circa June 2021 (Netherland’s tour of Ireland), Delaney went wicketless. Moreover, had the winning runs scored off her spin.

Though none of it all is perhaps as surprising as the fact as to why she’s not gone to play another ODI since last playing one in 2018 (against the White Ferns).

To attempt a context of the current firmament of Irish cricket, there’s a massive need to fill the gaping void that is the empty spot left behind by some very promising talents.

The extraordinarily talented Kim Garth is no longer around for Irish national duties having shifted base Down Under with much of her keenness towards the WBBL.

Adding insult to injury is the retirement of two of their most renowned cricketing forces in Cecilia and Isobel Joyce (better known as the Joyce sisters). And while Gaby Lewis, rising with every single series, and Amy Hunter, are such tremendous forces who are primed to go a long way with age on their hands, one needs spinners that can change the course of a contest in the way of the team.

Which is why not having talents like Delaney play that can make the ball speak in a contest that is so utterly bat-dominated would be the sort of Irish curse that could well go on to hurt Ireland themselves.

Forget not that Delaney isn’t all about off spin alone; with a personal best of 68 (v Zimbabwe), she’s already proven at a young age that she’s no mug with the bat either.

So who’s missing the trick and why? 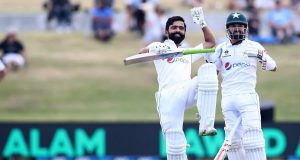 Abhishek Srivastava - December 31, 2020
0
How was 2020 for Pakistan Cricket? Well, the year ended with a heart-breaking loss against New Zealand. However, on the whole, it has been...