The 2003 World Cup, held in South Africa, wasn’t a particularly memorable event for West Indies. But one of the most fascinating  World Cup games that they’ve ever been a part of occurred on February 28. At Cape Town’s Newlands, the team that entered the contest at the back of a no-result against Bangladesh and a defeat to New Zealand, faced a stiff opponent in Sri Lanka.

This was a do or die. And though, West Indies fell agonisingly short by just six runs as Sri Lanka set a paltry 229, a notable moment of the game arrived when an avid young batsman walked in with the score reading 27 for 2.

It was a defining moment for Sri Lanka; the great Brian Lara was walking back, having taken 22 deliveries for a solitary run.

And just when the new man in had made no more than 10, he was struck on the side of the helmet by a brutal bouncer by Dilhara Fernando. A delivery before, he’d carved a beautiful boundary.

Shaken and soon carried away on a stretcher, it was a horrid sight for the West Indies fan, but a further confirmation that Sri Lanka were in the game.

The team soon nosedived to 169 for 7. But seeing the contest slipping from the grasp of his team, the man who’d been carried away for emergency X-ray tests was seen back on the pitch again.

Today, when batsmen suffer unfortunate concussion blows and are conveniently replaced, they have that luxury to sit back and relax.

But eighteen years back in time, 23-year-old Ramnaresh Sarwan showed immense bravery eschewing the easy way out and decided to help an ailing Windies.

To this day, when Sangakkara and Jayawardene speak of old World Cup memories, they recall Sarwan’s bravery and selfless act, all in a bid to defy Sri Lanka.

He’d soon fire 37 runs off just 25 deliveries, attacking Aravinda and Jayasuriya, taking the attack completely into his hands whilst taking his West Indies to the deep end of the contest.

Though none of it was enough, young Ramnaresh Sarwan was the last man standing as he fired 47 off 44.

But this wasn’t his first or last act of bravery for a team that in an era that was marked by its rapid decline desperately searched for heroes.

Two years later, batting in Auckland, he’d be stuck by a Shane Bond bouncer, a bowler far quicker than Fernando, but he refused to go down and soldiered on. He made 62 in that innings against a Bond, Franklin, and Vettori-powered attack.

There are cricketers who’ll always be remembered for great records. Think Sachin, reminisce Sir Don. There’ll be those who’ll be cherished for the lasting impact they left on the game. Think Lara and Kallis. And then there’ll always be those who were defined by their craft and lest we forget, grittiness.

You’d place the likes of Younis Khan, Rahul Dravid and Ramnaresh Sarwan in this category.

For a batsman who neither possessed a towering physical frame nor someone whose batting was punctuated by glorious strokes you’d find in the suave stylists such as a Gower or Sanga, Laxman or Azharuddin- Ramnaresh Sarwan was all grit and effort.

More substance than hype. More power of impact than shenanigans or loose words. More application of technique and yet more determination.

And it didn’t take him long to announce his true arrival in the sport when aged just 19, facing an attack that featured the great Wasim Akram, Ramnaresh Sarwan stroked his way to an 84 in his Test debut, in 2000.

And playing the game’s longest format for well over a decade, albeit never with the communal pride that he was just representing the glorious Guyana, but participating always as a true West Indian, Sarwan notched up 15 Test centuries, which included two magnanimous double hundreds.

And he did a lot more than scoring 3,500 Test runs at home in the Caribbean and 2348 on away tours, whilst maintaining a healthy Test average of 40 until the end.

Two years after Lara retired, someone along with whom he shared several victorious stands, including a mega series win against Sri Lanka in  the Caribbean in 2003, Ramnaresh Sarwan clinched his greatest individual achievement in the sport, scoring a 291 against England. With no Lara and Hooper around anymore to safeguard a dwindling team, just how many- and it truly beckons a question- would’ve pictured the West Indies scoring a 700-plus total?

But against an Anderson, Broad and Swann-packed attack, Ramnaresh Sarwan asserted his presence at Barbados as he batted and batted and continued to bat taking West Indies to a mammoth 749 for 9 (declared), which to this day, remains their second-highest team total ever.

That he stayed on the crease for nearly 700-odd minutes explains well that the dainty Guyanese was more than a foot soldier for West Indies who focused for long periods and put a prize on his wicket.

Someone whom you’d expect to play multiple roles- create partnerships, hold onto an end, defy bowlers, and accumulate runs all the time.

And this humble solider of the West Indies turned into a field marshal par excellence in 2003 during the Fourth Test against Australia, which became the single-most defining factor of his career as together with Chanderpaul, Sarwan took his team over the line but against an improbable target of 418 with McGrath, Lee, Gillespie, MacGill all rounding up the West Indies like wolves surrounding a docile prey.

But the batsman who cherished going square on the wicket, came on to the front foot in compiling his most important century ever- a 105, that despite facing immense pressure came of just 139 deliveries.

Each of his 17 boundaries were struck with a certain audaciousness, which we truly wish to see in the current West Indies team again. That he reached his three-figure mark at a strike rate of 75 was even more commendable.

With Chanderpaul at the other end, Sarwan joined forces with a tireless contemporary to forge what could be called one of West Indies cricket’s greatest rescue operations ever, the likes of which should fuel a Hope, Brathwaite, Mayers, Powell, and Blackwood with self-belief, perhaps the thing one misses the most in the contemporary structure.

Yet, a lot is reserved- and understandably so- for stalwarts like Lara, especially for efforts like the 400 not out, while very little for Sarwan, who in the same year as cricket’s quadruple century, plundered 1000-plus calendar year at an average of 50.

There are no fan clubs in his honour on Facebook. You won’t find followers on Twitter running into lakhs. The big commercial hoardings won’t sport his smiling face to sell brands.

Though truth is, Sarwan was a vital pillar of the West Indies batting in an era where runs often ran dry and where forging match-winning partnerships was perhaps was necessary to delay what was often inevitable- another West Indian defeat, especially in the post Ambrose and Walsh era.

And despite all of this, Sarwan wasn’t just a strong character in the game’s most eminent format, he was more than handy in limited-overs cricket, where he fired 5 centuries and struck over 5,800 runs at a very healthy average of 42 making quite a bunny of India against whom he’d end up stroking not drearily compiling 1,300 runs. Make no mistake for he faced up against everyone- whether Kumble or Zaheer, Harbhajan or Munaf Patel.

Yet, for a career that produced in excess of 11,600 runs and 69 half centuries, there remains a massive puzzle that perhaps the West Indian cricket would love to solve, provided there’s interest.

Did we lose Sarwan earlier than expected from the game? Was he unjustly dropped in 2012 whilst averaging 39 with 546 runs the year before (in ODIs), where scoring five fifties suggested he hadn’t suddenly forgotten how to score?

Was the fact that he didn’t boast a muscular frame you’d associate with a Russell and Samuels the reason for overlooking the Guyanese? Moreover, at 33, an age where most build a second wind of their career, retirement being the last thing in their mind, was he considered too old or unfit for the very team he’d rescued time and again from ominous opponents and gloomy results?

Has West Indies cricket been all that fair to a happy-go-lucky man off the field but one who was a true combatant on the pitch? We don’t know and can’t answer. But what we do know and must consider is that Ramnaresh Sarwan, the cheery bandana-beneath-the-helmet did more than take vicious body blows for upholding the beauty that’s West Indies.

Note- Kindly follow, should time permit, a Sarwan-special episode on Caught At Point podcast as the under-appreciated legend turns 41! 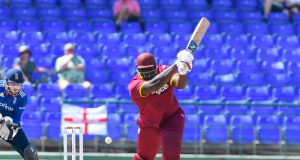